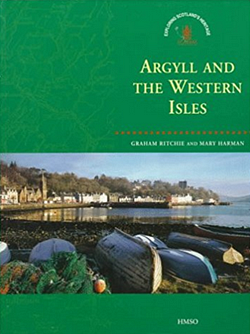 It details the story of Argyll and the Western Isles, highlighting well-known and some not so well-known monuments from the past, including the mesmerizing Callanish Stones from the Neolithic area. The book also includes a full-colour Excursions Section to encourage the readers to visit the archaeological sites in person.

Through the archaeological sites featured in this book, the reader develops a deeper understanding of the history of Argyll and the Western Isles and how people have lived their lives here over the centuries. This is a part of Scotland that’s always been heavily impacted by the Atlantic and it has been a centre for international trade since time immemorial. Argyll and the Western Isles is also rich in long lochs that once served as important transport hubs within the region, long before the advent of modern cars and asphalted roads. Many of the seas-lochs go far up inland.

Mary Harman works with the conservation of the natural heritage of the Western Islands.

Graham Ritchie is Head of Archaeology in the Royal Commission on the Ancient and Historical Monuments of Scotland.

About the Callanish Stones I

The Callanish Stones I is an arrangement of standing stones near the village of Callanish. The stones are placed in a cruciform pattern with a central stone circle. They were erected in the late Neolithic era and all of them consists of local Lewisian gneiss.

The continuous creation of monuments in the area makes it reasonable to assume that Callanish was an important spot for prehistoric ritual activities for at least 1500 years. The Callanish Stones I stone circle was set up between 2900 and 2600 BC, but it is not known whether the stone alignments were constructed at the same time as the circle or later. The chambered tomb in the eastern part of the circle was inserted some time after the stones were erected.

Callanish Stones I were covered by a thick layer of turf between 1000 BC and 500 BC, and this turf remained there until the peat was removed by James Matheson (owner of the Isle of Lewis) and his workers in 1857.

According to local folklore, the Callanish Stones were petrified giants who had refused to convert to Christianity.

Today, the Callanish Stones are managed by Historic Scotland and there is a visitors centre nearby run by Urras Nan Turrsachan. The stones are located on a beautiful low ridge above the waters of Loch Roag, with the hills of Great Bernera functioning as a backdrop to the scene.