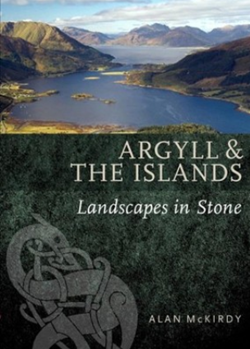 Underneath it all is the bedrock, forming a silent foundation to all things Argyll. In his book “Argyll & the Islands”, Alan McKirdy helps us understand the geology of this unique part of Scotland and how it has impacted nature and settlers here since time immemorial.

Did you know, for instance, that much of the ancient bedrock of this region was created from a once-towering mountain? Did you know that coal swamps once covered the land? Did you know that this is a place marked and changed by fiery volcanoes and ice cold glaciers?

In addition to mainland Argyll, the book focuses chiefly on the islands of Islay, Garvellachs, Colonsay, Jura, Lismore, Kerrera, Lunga, Oronsay, and Scarba.

Prior to retiring, Alan McKirdy was Head of Information Management at Scottish Natural Heritage. He is the author of several books and book chapters, including the books “Argyll & the Islands” (2017) and “Set in Stone” (2015). In his writings, McKirdy often focuses on geology and he has helped promote the study of environmental geology in Argyll and the rest of Scotland.

Islay (Scottish Gaelic: Ìle) is the southernmost island of the Inner Hebrides of Scotland. It lies in Argyll, just south west of Jura. The distance to the mainland is approximately 40 km. With a total area of nearly 620 square kilometres, Islay is the fifth-largest Scottish island.

The geology of Islay is equally complex and fascinating. The deformed palaeoproterozoic igneous rock of the Rhinns complex is dominated by a coarse-grained gneiss cut by large intrusions of deformed gabbro. Outcrops of quartzite is located south of Rubh’ a’ Mhail, and a strip of mica schist and limtestone cuts across the centre of the island, from Oa to Port Askaig.

Near Port Askaig you will find a tillite bed, formed during an ice age in the Precambrian period. Islay was also ice-covered during the Pleistocene glaciations, except for Beinn Tart a’ Mhill on the Rinns. Beinn Tart a’ Mhill then formed a glacial island, a so called nunatak, peaking up from the ice.

The west centre of the island of Islay is home to sandstones rich in feldspar. If we move even more to the south, we will encounter a band of metamorphic quartzite and granites which are a continuation of the beds that underlie the Jura.

Southern Islay features a ragged coastline formed from mica schist and hornblende. The series of raised beaches around the island is the result of changes in sea level, which in turn were due to a combination of melting ice caps and isostasy.

The western peninsulas of Islay are largely separated from the rest of the island by Loch Indaal and Loch Gruinart. These lochs formed along the Loch Gruinart Fault, which is a branch of the Great Glen Fault. Occasionally, minor earth tremors are produced by this fault.